When the beautiful gets ugly: Women's 3000m at USATF Indoor 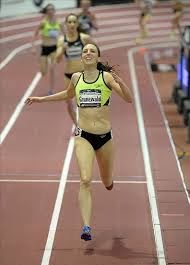 This weekend was the USATF Indoor USA Championships in Albuquerque, NM. The top 2 finishers in each race get to go Sopot, Poland for the World Indoor Championships. In a year without Olympics or an outdoor World Championships, this is one of the biggest track races of the year. So, naturally, there has been a lot of pressure on the elite athletes here to make that team, and I was very much looking forward to watching their journeys to Poland.
That feeling of excitement changed after the women's 3,000m race. An indoor track race means often 2 laps for each lap that would be done outdoors. There tends to be a lot of jostling, as everyone is fighting for positions. In the final lap, Gabrielle (Gabe) Grunewald made contact with eventual 3rd place finisher Jordan Hasay, and then went on to victory.

There was a lot of back and forth as to whether the contact impeded Hasay's stride, and eventually Gabe G was disqualified and lost her first national title and well-deserved ticket to the Championships. Alberto Salazar, the heralded coach and dominant American runner of the early 80s, lost his temper in a screaming match with another coach during all of this. After much back and forth (this story blew up all of the running and track and field websites), Gabe was finally reinstated on Monday as the champion. It was only because Jordan Hasay withdrew her protest (whether it was on her own choice, or that of her coach and Nike, that is still unclear): the decision was not overturned.

Screaming, yelling, threats...this makes our sport look ugly. The NFL has bullies and MLB has doping scandals (track does too), but on a weekend when the country's best should be celebrated for their hard work over the long winter, an ugly storm brewed instead.
It's not my place to discuss interference or clipping - I am not a USATF referee or official - I have no idea how that works. All I know is that it made for a stain on what should have been a banner of a weekend for our sport.

In protest or show of solidarity, the 1500m women runners walked off of the field after their race, hand in hand. They were not engaged in a shouting match against the officials, but united in a peaceful manner to show their support for the runners.
I don't think the resolution ultimately meant that there is a solution to some of the larger issues that boiled over. But I know this:
The last time someone acted with so much anger because of something in a race, this happened: 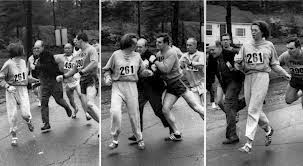 Jock Semple, in anger of having a woman in his protected, sacred race, leapt out of the official bus and attempted to physically remove runner #261, Kathrine Switer out of the race. But then she, after being attacked in the 1967 Boston Marathon, went on to advocate for the inclusion of the women's marathon in the Olympics, and ran a personal best of 2:51 in 1975.

She turned a negative into a transformative moment, not just something that changed her own life, but impacted the lives of millions of women, myself included. 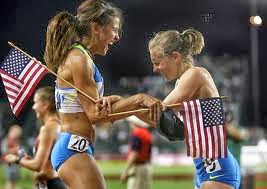 I don't know how this weekend's events will impact the sport at large. I'm sure for many runners, this isn't even a story on their radar. But it was an ugly moment and some good needs to come from it. This is what runners supporting each other should look like. I hope the stain can be washed away soon.
Posted by Medievalist at 7:54 PM No comments:

I had decided on a very limited race schedule this spring - just 3 races before the race to the altar! 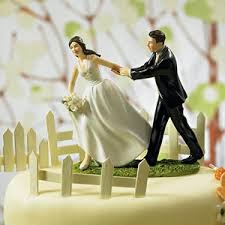 But still, even though I'm not really aiming for or expecting any PRs, it is my goal to be consistent in my training and get close to PR fitness so that those times can go crashing down in the fall. So, I still had my spring rust-buster race set up: Love the Run You're With 5k. It's at Pentagon Row, which means you're near the Pentagon, and during part of the race, you're high up enough to see the Capitol and Washington Monument (a nice view for the final half mile of a hard 5k). I've done it two times before, in 2012 (ran 20:41 a week before meeting my fiance - my last single race) and in 2013 (20:20). Last year, I was having some knee problems leading up to the race, and thereafter too. But I ended up having a great season. This year, I have been really healthy (knock on wood), but I have missed the occasional run, including a few road workouts. But this time, it hasn't been injury related - I've just been really busy. There's been a lot of visitors/traveling going on, and yes, I could also get up at the crack of dawn to make it all fit in, but nope. Having a good enough training season instead.
With this attitude in mind, I still wanted to do well - if I'm plopping down money, may as well make it count. I had a good fartlek workout of 8 x 90 seconds on Tuesday as part of a 8.5 mile run, and it did kind of light a fire to run fast and think about the race. So, I did keep all of my usual pre-race traditions going, and was happy that it was 30 degrees out with little wind when I got there this morning. With it being an out and back course, I was able to cover most of the course in my 2.5 mile warm up. I bumped into a few friends who I've met through DC races and we were just chatting away really until 30 seconds before the start. It was nice to relax and be distracted right until the gun went off. I know I get too uptight sometimes, so this was a good reminder that chilling out can be a good thing!
Boom, gun is off. While I have been doing some speedwork, this was a big welcome back to going fast. And going uphill! The first half mile is uphill, and while I'm good at hills, this is a hard way to start a race! But, I hit mile 1 in 6:26, which is right at pace for 20 minutes. (Cue Matthew McConaughey) Alright, alright, alright, this is pretty good! And honestly, in this course, the first mile is the hardest, and I felt like I could pick things up a bit. I hit the turnaround and started moving, really running faster and starting to pick off girls. I have a friend who is really good (like sub 19 5k good), and I could see her, and I just wanted to get as close to catching her as I could. My hands were cold (foolish for not wearing gloves...my one mistake), but the brisk air was refreshing. I wasn't dying, but I definitely was in the speed zone, and hit mile 2 at 12:40 (6:20 pace) and was pumped. Woo! This is great! I passed a trio of girls, and had my friend almost in reach. Boom - the other girls used the downhill to their advantage and flew by me, but I couldn't fight back any more, but...as I could see the clock, and this was a lot better than expected:
19:38
47/1064 overall
12th woman
6th in Age Group
Wahoo! Sub 20 and less than 30 seconds away from my PR
This is the earliest in the racing season I've cracked 20 minutes, so even if this is just a good enough training season, it is off to a good start! After my cooldown, bringing the day's total to 9 miles, I cashed in (there's a ticket on our bibs) for my free mimosa - yum! Free drinks and well earned drinks are the best kind! It was a great morning - fun with some friends, a good race, and great way to kick off the spring.
Rust busted! 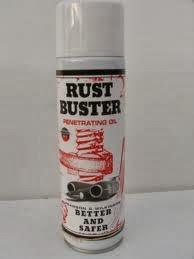 Posted by Medievalist at 9:42 PM No comments:

Kathrine Switzer's Marathon Woman is one of my favorite books of all time, particularly because she so aptly describes all of the emotions, dreams, sensory experiences, and sensations of a runner. Moreover, her story is one of ambition: the drive to train for a marathon, eventually reach a 2:51 marathon PR, and to push the IOC to allow the women's marathon to be an Olympic event in 1984.
After her first (and most infamous) marathon, she decided to train for her second. Kathrine had a time goal in mind, and said if she didn't achieve it, she would be content being "a happy jogger" for the rest of her life. 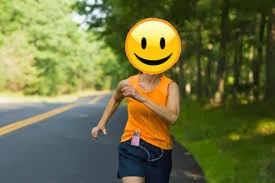 I think about that idea - the happy jogger. I know they are out there - people who run who like to run, but don't get wrapped up around the precise time or distance they go. They don't do races - they just run, literally for fun. And we who do races do it for fun too, but there are definitely competitive goals embedded in our drive to get out there and get after it. I know that's how I feel now...I want to keep improving.
But there will be a time/age when there will be a peak, and then the inevitable decline. I hope I'll still want to have that competitive drive, and shoot for age group PRs. But whether its age or what, I hope I could also be a happy jogger.
A lot of my runs lately have been on the treadmill. It's been too icy outside to run, so I've been having date nights with the machine and ready to go crazy. Finally on Friday, we had a mini heat wave and I knew this would help. On Saturday, we went to Pennsylvania for the day. So, I had a good enough run. Instead of 10 miles with 5 at tempo pace, I had a good enough run of 5 miles. The sun was out, 30 degrees felt warm, and this was perfect. The 5 miles flew by, and it made me think about the happy jogger. I think if I wasn't training, 5-6 miles would be the perfect distance to do all of the time. It's in and out relatively quickly, it burns a decent amount of calories but doesn't knock you out for the rest of the day either. The endorphin rush comes, maybe it's not the runner's high, but definitely a sense of accomplishment and relief. It did the job - it cleared my head and had me ready for the day.
Today I ran 13.1 as a training run - 1:39:45. It was an even warmer day today - I had shorts on, and it was a nice teaser for spring. It was great, and I loved it. Hey, it's the super bowl - I'd like to be able to enjoy all of the snacks! But I know there will be a time when I won't feel like getting out there for that long.
And so for now, there are flashes of the happy jogger - a good reminder of the purity of this whole running thing.
Posted by Medievalist at 6:12 PM No comments: