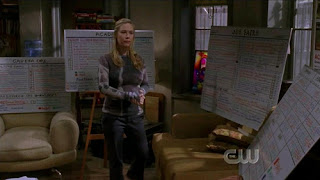 In the final season of Gilmore Girls (no major spoilers here), Rory and Paris are preparing to graduate from Yale. Paris Geller, an overachieving, ambitious, neurotic, yet still lovable perfectionist, ambushes her roommate Rory just moments after returning from the holiday break. She presents Rory with a hyper detailed chart, named Operation Finish line – their plan to make it through their final semester of Yale and graduate with an array of opportunities at their feet. They both ultimately succeed -- all of their hard work (and neuroses) paid off.


I am standing at the cusp of my own Operation Finish line, but renamed Operation Endgame. At the beginning of the semester, when, after having submitted my third chapter, my advisor said that we ought to meet in the coming weeks to discuss my “endgame,” – the final stages of my dissertation. That meeting was this past week.

We would discuss my most recent chapter (which I wrote over the summer), and plans for the next six months or so. While this semester I have been saying that I planned to graduate in the spring, I always said so with a hint of trepidation and apprehension. In my paranoid state (which is really all-too familiar for graduate students), I even dared to fear that secretly my committee viewed my work as interesting, but a project that would never fully come to fruition.

With that in mind, my nerves were frayed on Wednesday. I had had a nightmare the night before about our meeting, a catastrophic result of my subconscious, and my pounding heart when I woke up just brought me back to reality. My pre-meeting run (you can bet I will go for a run on the morning of my defense!) had only temporarily alleviated my nerves.
But as we talked about my most recent chapter (recognized to be in decent shape), it was clear that my advisor was on board, and like me, had eyes on a spring defense. Our conversation was intense, but that was more of the rigorous discussion of method, structure, and shape required of my dissertation. As we wrapped up, my advisor said, "by hook or by crook, we will get there," and "there is a light at the end of the tunnel." Although those are just sayings, she did truly offer the validation I was looking for: that I both could and would finish.
The following day, I received an email from her with a firm deadline of when to submit my first complete draft of the dissertation: December 20th. Although just over two months away, that is coming up quickly, and i wrote back that it would be a tight race to get there, but manageable. She replied, "Let's do this!" Again, that enthusiasm and feeling that this was a team effort was amazing.

It felt like things just kept picking up from there. I had received permission to send my first two chapters ahead to another committee member, who read and commented on them with such speed and depth, I was stunned. Although revisions need to be made, they were deemed to be "very good chapters." Another professional atta-girl!

It was the week where it felt like things were finally coming together, and that my committee truly did have the confidence in me that I so desperately needed. As I told the news to my mom, my biggest cheerleader and the one (along with my dad and other loved ones) who never doubted  me, I said with some relief that for the first time, I truly believed I was going to do it, to finish and defend this dissertation.

There is so much to do, particularly in the next two months, but with Operation Endgame fully in place, I'm tackling it with eager anticipation, not dread.

Posted by Medievalist at 9:48 PM No comments: