I've run the Scope it Out 5k twice before, and it holds a special place in my heart, because it's where I broke 20 minutes for the first time in 2012. It was a game changing race for me - dipping under that mark is still so memorable to me, even four years later. So, I even though it was questionable if I'd dip under 20 minutes this time, I definitely wanted to come back. It also doesn't hurt that Freedom Plaza (where the race started) is just a jog away from our apartment. While it didn't look springlike or feel like it (38 degrees) on the first day of spring, it was time to lace up and race toward the Capitol!
Looking around, I had a feeling I was going to be taking things out hard on my own. The last time I did this race in 2013, I came in 4th and pretty much ran a solo race. There were so few people around me, and I remember it being a hard effort to run by myself. It didn't seem like there were a lot of fast people (and spoiler alert: the male who won was 55 years old), so I was going to just run hard and hope to tack onto some guys. And we were off!
Within half a mile, I was the lead female, and while it's happened a few times now, I must admit, it is still a very cool feeling to lead a race. Maybe part of it is that as a child, I was never good at sports. I was afraid of the ball when it was thrown at me, and I just never saw myself as an athlete or a big winner. There were other things I was good at, school, music, but was never #1 at something. And even though this may happen at smaller races, I'm certainly no big-wig runner, winning is a victory that goes beyond race day. So that is something I will always savor - and it is a feeling that will also always make me push to make sure I protect first place and not let someone snatch it in a moment of weakness or hubris. I went through the first mile in 6:35, and it was a cold first mile. Running into the wind was hard, particularly without a lot of people to help block the wind. It would've been hard to knock so much time off the next two miles to break 20, but I was going to be damned if I didn't try.  6:30 for the second mile, and I picked up speed in catching one or two guys -- there is something about the act of dueling it out with someone that enables me to focus and just dial in and block everything else out.
This race is very cool because it is a race down Pennsylvania Ave and around the Capitol. So, with the eyes on prize, waving the Capitol goodbye again and trying to nip one more guy in the final mile.
Because of the out-and-back nature of the course, as I was making my down for the home stretch, there was a big pack of people going in the opposite direction. And as groups of women saw me, clearly in the lead among women, they whooped and cheered "First lady!" "Woo!" "Go, girl, go!" And in response, I pumped my first at them in solidarity. We are all women doing this, getting out there, and it's important to recognize that. It's time like that when I think of pioneers like Kathrine Switzer, who got out there and showed other women that they can do this, be runners, push when it's hard, and leap over hurdles that seem unattainable to clear. It was that thought and those cheering women that made me smile as I crossed the finish line and broke the tape.

20:26 is not my fastest 5k time, but that's not what this was about. And my family said that too, "Who cares what time you ran, you won!" And they are right. We need to cherish victories of all shapes and sizes. I won this race (and a pair of running shoes!), and for all of the women in this race, during Women's History Month, this was a victory.
Posted by Medievalist at 10:48 PM No comments:

DC has offered a number of running doubles races where they offer both a 5k and a 10K and schedule them so you can run both races. I had never done one and had admired those who had done both races, pushing hard in 1 and then turning around literally half an hour later to do a second race. Part of my goal in 2016 is to try new things, so I bit the bullet and signed up for the St. Patrick's Day 5K 10K double.
I hadn’t raced a 5K in almost 6 months and 10K in 5 months so it was going to be a lot of new things for sure. I haven't done speed work again in a long time either, so I was preparing for this to be tough when I started pushing the pace. The weather was cool, there wasn’t a lot of wind, and most importantly, it was on a course that I'm quite familiar with. I figured the big goal was to push in the 5K. I had scheduled another 5K for two weeks later and wanted to see what kind of 5k shape I was in and then just hang in there for the 10k.
The gun went off for the 5K and I went out feeling really good, surprisingly so because I hadn’t tapped into sub 6:30 pace for a couple of years. Still, I was able to come through the first mile around 6:25, which I was very psyched to see (6:26 pace is needed to break 20 minutes). For me, 20 minutes is sort of the golden standard for a really good 5K time (last time I ran under 20 minutes was February 2014). So I went through the mile just under 5K pace for breaking 20:00 and feeling good. I thought to myself “If you just keep going at this pace it’s possible you could get do it, and if not, this is still much better than it did last year.” Thankfully, there were a couple of girls around me and we were going back and forth passing each other and I could feel that there's someone right on me. That always helps motivate me to keep going, if I can feel someone on my shoulder like that. I clicked off 6:27 for the 2nd mile and I thought “Oh my gosh, I really could break 20!” I just just need to hold on tight, but really the 5k is just about finding an uncomfortable pace and hanging on as best as you can. With about .5 to go there was one final hill before you hit the Washington Monument. I've done enough races on this course to know that it does take a bit out of you, and l I was trying to find that perfect balance between saving enough so it wouldn't kill me and making sure I wasn't holding back. I crested running down the final stretch and I could see the clock and it's always good when you can see the clock and you're watching the seconds tick off. Someone blew by me and I knew I couldn’t catch her. There was no way I had that kind of closing speed that she did. But, I pushed and pushed and smiled so hard as I finished in 19:55. I couldn't believe - I hadn't broken 20 minutes in 2 years! Me and the other girl congratulated each other -- it's really we good that we pushed each other and motivated each other to a strong finish. The picture says it all - I was just thrilled and felt like the old me was coming back. 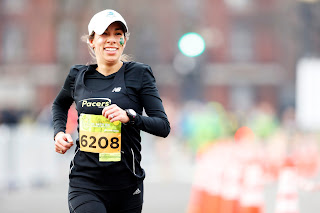 I was very happy and then the plan was to jog around for about 15 minutes trying to keep my legs moving and keep my body temperature up. It was about 40 degrees outside and I just didn't want to get too cold or too stiff so I just slowly trotted around the National Mall and tried to simultaneously celebrate my 5k and prepare for the 10k that is going to happen in 25 minutes. Once again I got back into the corral with the goal of going under 45 minutes for the 10k. That wouldn’t knock it out of the park by any means, but I really was not sure what it was going to feel like on tired legs. In the cooldown/warm, I felt pretty good but the real time would tell when the gun went off.
I took off and I was clocking out under 7 minute pace, which would be under 45 minutes. It was certainly evident that I had already been running hard earlier in the day and the way people had spread out, I was running by myself which is pretty hard when you’re tired and want to feed off of other people. I managed to catch a group of people 2 miles in and just held on so I could have some external motivation. At one point, I had a crowd of men running around me and one guy running so close to me that he ended up elbowing me, which frankly kind of irritated me. It is an open road! But the anger and frustration motivated me to keep going in to try and pass him, which I don't think I did. By mile 4, I was tired and both in terms of legs and my whole body. I felt like I could have fallen asleep. As lively and quick as I felt in the 5k, I felt just the opposite here: no longer fresh or spry. The goal was to try and not fall off the rails too much, but I was definitely counting down the minutes. Again, I had that final hill that I needed to save my energy for. I hung in there and finished at 43:16.


I finished completely exhausted but very proud. I came in 9th for the women in the 5k, and 17th in the 10k, and third woman in the double division. I was very proud of this race. It was a new experience for me. I'm not sure if I'll do it again, but I am currently looking for new challenges this year and this was definitely a challenge! I am very excited and looking forward to putting together a good racing season in Spring 2016!
Posted by Medievalist at 8:25 AM No comments: