So, I had gotten back on the speedwagon with track workouts. I had 3 consecutive weeks of good track workouts, and then I fell off the speedwagon. Well, not so much as fell off, but decided that finishing my third chapter required more focus. Opted to run for sanity, not for speed. 5 years ago, I wouldn't have been comfortable making a decision like that - I tended to cling to running schedules with no sense of flexibility. While I still can't cast off change with the greatest of ease, I've come a long way. But I digress. The point is - speed workouts hadn't been happening. But I still have a half marathon coming up 9/18 that I'd like to do well in. So, I found a low-key 5k to do in Vienna this Tuesday, which I thought would be a great substitute for a track workout. All the better that it was on one of my favorite running trails in this area - the Washington & Old Dominion trail.

There was a merciful dip in the temperature, meaning that it was only 84 degrees at 6:30, instead of 94 - thank goodness! I usually do a 2.5 mile run, but decided why not just preview the whole course - so what I planned to do was a 5k warmup. This ended up being close to 4 miles because I got lost trying to find a bathroom...oops. Some things don't change! I ended up getting to the start with about 2 minutes to spare - needless to say, the adrenaline was pumping, and I had definitely booked it getting there.

It was a relatively small race -- only 58 people in the race. So even though we were all crammed along the 12 foot path for the start, things spread out pretty quickly. I was figured I'd run somewhere between 20:00 and 20:30, and so was pleased when I hit the first mile in 6:31. It felt fast, but once things spread out, and I had a couple of people to focus on picking off, it also felt like a doable pace. I had two women nearby that I was determined to pass, and did so just before the turnaround mark, which put me in second place. I came through the second mile in 13:02, running more evenly than I usually can. I was then set on chasing a couple of guys, who on the surface seemed to be within reach - probably about 50 meters ahead. Having just watched the men's Olympic marathon a few days before, it puts some perspective into how close together two people are when they run. It often looks on TV that someone can easily pass someone, that they're "right behind them," and that's not true. Once someone is at least 10 seconds in front of you, you need to put a lot of energy into making up that gap, and it didn't seem like I would do that. 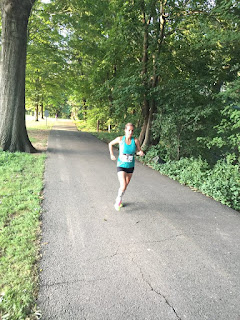 However, I did manage to finish in 20:15 (6:31 pace) - the most even 5k I've ever run (and probably will). I was 2nd woman, earning a $20 gift card (which was the cost of the race) to a local Irish pub that hosted the after party. Give the fact that I hadn't done speedwork in a few weeks, and my pre-race spontaneous speedwork/race to get to the start line, I chalked it up to be a great race. $20 for a beautiful course on a Tuesday night - it was great. I'll actually be doing another weeknight 5k tomorrow night - hoping to get a little closer to breaking 20 again!
Posted by Medievalist at 9:55 PM No comments:

In racing the mile, the third lap is universally acknowledged to be the most difficult.
The third lap is the most taxing on the body as the adrenaline from the first two laps is gone and the body's own lactic acid builds up in the muscles, decreasing usable oxygen. As the body begins to suffer, the mental training of the runner must step up to continue to propel the runner forward. If a runner gives up on the third lap, it rarely matters how fast he can run the final lap. Too much ground has been lost to finish well. Whether running against opponents or simply against the clock, the third lap can make or break a runner's one-mile success. Marc Hays
I am in the third lap of my dissertation. I have one chapter left to write, along with the introduction, conclusion, and revising the entire dissertation once it's a complete document that can be read cover-to-cover. This week I submitted my third chapter, which was both the most enjoyable and quickest to write. I think part of that has to do with the fact that I've finally started to figure out the best ways to organize my thoughts, to structure my argument, and to write efficiently. I finally figured out how to aim for quality over quantity, and as that happened, better words appeared on the page. When I focused on making a point over hitting a page count, I started to find a flow. It was exciting and like the cumulative years of training as I accumulated thousands of miles, I started to accumulate chapters.
While my family and friends have said that I'm in on the home stretch, and I'm sure in the big perspective, I am rounding the bend, but I think I'm in the middle of my third lap of the dissertation.
Jenny Simpson made our country proud Tuesday night becoming the first American woman to medal in the 1500m. But that third lap never looks that enjoyable 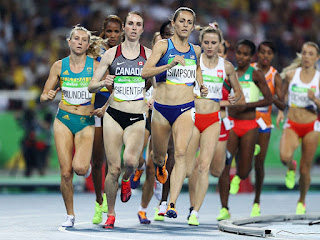 It is only at the end, when crossing the finish line in victory, that the joy is evident. You can also see the relief etched into her face, knowing that all of the hard work and sacrifices paid off. 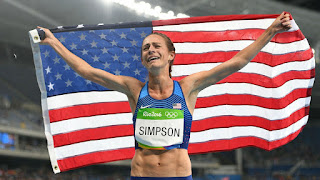 There is still new writing to be done, and it is my goal at the end of the fall semester to have a full draft. I anticipate having less than 100 pages of new writing to do. My final lap will be in the spring semester, when I revise and defend my dissertation.
I think I learned how to step things up this summer in terms of focusing single-mindedly and really throw everything I can at this chapter. I will continue to use that approach this fall, and looking forward to reaching the bell lap when I ring in the New Year of 2017.

Posted by Medievalist at 4:28 PM No comments:

Finding the light inside: Girls on the Run

According to the Dove campaign on women and self-esteem, 7 in 10 girls believe that they are not good enough or don’t measure up in some way, including their looks, performance in school and relationships with friends and family members. How terrible is that? And girls with low self-esteem are at higher risk for a litany of issues, including depression, negative activities (like cutting, disordered eating), and so much more. And with facts like that, coupled with media barraging young girls with unreasonable standards of what it means to be beautiful, what hope is there? I have a young cousin who is going to be dealing with this (she's 10), my best friend has 2 baby girls...what are they up against?
What if every girl knew that she had a powerful light in her? And the belief that she can achieve anything? 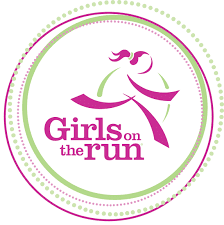 I am very excited to be joining Girls on the Run (GOTR) this fall as a coach for one of the local teams. The above question comes from GOTR's training program, which I've just begun. I am so looking forward to working with a group of young girls this fall, culminating with a 5k in December. I've wanted to get into some sort of coaching for a while, and this seems like the perfect opportunity. Running has given me so much. So much. Running has given me confidence and peace of mind. The gift of running has given me the clarity and focus to accomplish what I've done so far as an adult. And while I did do some running in middle school and in 9th grade, there was never a coaching environment that really encouraged us in ways that stretched beyond the cross-country season.

When I worked for the Center for Talented Youth, I served as a quasi-chaperone for one of our talented students - she wasn't just smart, but a gifted runner. We would go out a few times a week early in the morning, and there was something about those shared moments that really resonated with me. And my work with CTY as a whole, working with gifted children, made me more passionate about serving to better the development of children, promoting both academic and social experiences.

I served as a "run buddy" for the GOTR 5k a few years ago and found it to be a really enjoyable experience. I told myself that once my life felt more in order, I would return to the program as a coach. This semester, my only objective is to write. But that's not all anyone can do - you need something going on to balance that out. I think going from the interior nature of writing solo, to a group of excited young girls who are eager to accomplish something - that is going to be some kind of magic.

WE BELIEVE THAT EVERY GIRL
CAN EMBRACE WHO SHE IS,
CAN DEFINE WHO SHE WANTS TO BE,
CAN RISE TO ANY CHALLENGE,
CAN CHANGE THE WORLD.
CAN.
Posted by Medievalist at 11:22 PM No comments: