Sunday was the Navy-Air Force Half, and I came into it thinking that it would be great to be within shouting distance of my PR (1:32:35), and maybe, maybe if everything came together, a PR was a possibility. As I was doing my shakeout run yesterday (3 miles), I did a couple of sprints at 7:00 pace, and it felt fast. I was hesitant whether this would happen or not, but sometimes you just have to take the risk and go for broke.

I got a good night's sleep, and got to the start with plenty of time to spare. My warm-up loosened me up, and I got to the start line in plenty of time. I had to laugh as the gun went off, because the song they played at the start was "September" by Earth, Wind, and Fire (that was the song we walked into at our wedding reception - not to be confused with our first song). With a smile on my face, I took off, hoping to hit around 7:00 pace (knowing that 7:02-7:03 pace would net me a PR). The first few miles I hit 7:00, or even a few seconds faster pretty consistently. So brings up the eternal question, "is this a reasonable pace or will it eventually blow up in my face?" I hoped for the former, and pressed on.

When Katy Perry's Olympic song Rise came out, I liked it, but it didn't quite stick with me like roar and firework did. However, last week I was looking to get some new music for my runs, and opted to get it. On one of my runs, I think I listened to it 3 or 4 times in a row. I think part of it that stuck with me was
Oh, ye of so little faithDon't doubt it, don't doubt itVictory is in my veinsI know it, I know itAnd I will not negotiateI'll fight it, I'll fight it

I will transform
I would say that what gets in the way of my success the most is doubt. The fear of failure can be so gripping and so hard to shake. This applies to both my running and my writing - doubt in myself. We are our own worst enemies, right? I am. So, the song really resonated with me. Throughout a lot of the race, when spots of the course were quiet with few spectators, I drew on the song and played it in my head on repeat. 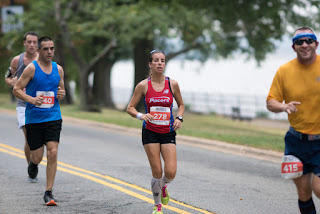 Things had spread out within a couple of miles, so it was nice to have a lot of room and not feel crowded. There were still enough people around to work on picking off other runners throughout the course. Every time I hit the mile marker up through mile 10 was 7:00 pace or better. Those first few miles were clicking off so easily, that I was worried that my excitement over this would lead me to blow up. By mile 7 or 8, however, it started to feel like a lot more effort to hit this pace, and the exertion was definitely taking its toll. I was wondering if I should try to slow down to recover, but feared that if I did, I wouldn't be able to get back my momentum. So, I pressed on with the fast pace, with fingers crossed. 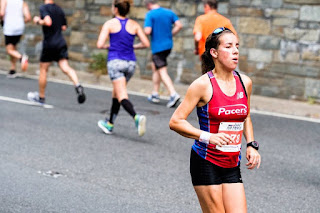 I have to hand it to the volunteers at the water stations. First of all, it is such a selfless way to spend a Sunday morning, and such a helpful and friendly group of people to have along the way. I must give a shoutout to the folks at the mile 7 and 11 (same station - part of the out and back route), who were whooping and cheering like it was the end of the Boston Marathon. It was such a thrill, and their enthusiastic cheers really offered a shot of adrenaline when I really needed it.

I was running through Rock Creek Park (where I do a lot of my running), and at mile 8 or 9 (when I was really starting to hurt and feel like my pace goal would go out the window), a man sidled up next to me. He said, "You ladies are all so fast! There are like 4 of you in front of me - I don't know how you do it." I just smiled (I didn't really have the extra oxygen to explain that yes, some of us can run with the big dogs), and he moved forward. I ended up passing him for good a mile later at mile 10, which I hit at 1:10:05. 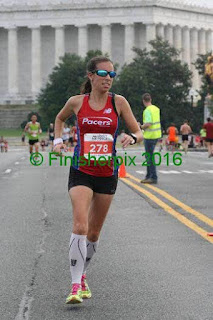 I knew that my husband would be waiting for me at mile 11, and that gave me such a push to slog through what would be the final 5k. I was getting so tired (pace slowed down a few seconds per mile), and some of the race pictures really highlight that. But at mile 11, there was Pat, cheering, yelling, and putting a smile on my face. I could handle 2.1 more miles - it would all be over in less than 15 minutes. There was one turn around a cone around mile 12, which I did ungracefully, but was able to catch a glimpse of a running buddy of mine. People kept yelling, "last mile! So close!" but the final mile of a long race feels so much longer than the first one. The finish was at the Washington Monument, which felt like it loomed ahead, both within my grasp and just out of reach. But as I hit the final turn and could finally see the clock, I knew a PR wasn't a far-off dream, but a reality. I pumped my first and had a huge smile on my face as I crossed the finish line. 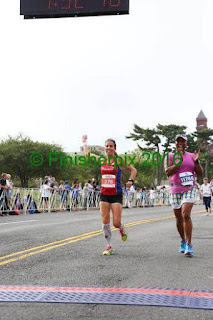 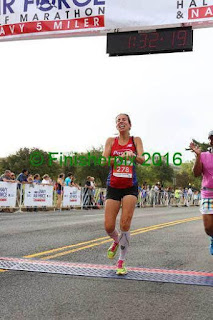 I couldn't stop smiling, because this really felt like a big victory. Ultimately, it was one of the most evenly paced runs I've done, particularly in the longer distance. I slowed down a few seconds per mile towards the end, but it was not a total crash and burn. My husband was impressed with how closely I managed to predict my time, but I guess at this point, with so many races under my built, and so much experience with longer runs, it's become a lot easier to be consistent. It didn't occur to me until afterwards, that I hadn't PRed in almost 3 years (October 2013 at the Army 10 Miler). I didn't realize it hadn't been that long. Nor did I think that I had said goodbye to PRs - it's just that those extra hours of running have shifted into writing time, as they should. So it made this victory all the more sweet - that I managed to gut it out, run both hard and smart, follow through on my training, and achieve a quietly-set goal with a flourish.
Posted by Medievalist at 9:30 AM