I've got some catching up to do!  2 big blogs coming up:
2 years ago, my friend Jenny and I made a pact.  If I achieved a BQ at MCM 2009, she would run a marathon and I would run it with her.  At MCM 2010, we ran that marathon together, and finished in 3:57:40.  It was a great debut marathon for her, and we vowed that we would return again.
And in this case, we returned to where it all started - the Marine Corps Marathon.  Last year, I sent Jenny schedules and planned most of her training.  But this year, she did the majority of it herself - she already had a good base and knew what worked best for her.
Jenny arrived Thursday night in DC, and I must say, I love airport reunions.  I'm sure part of it came from Love Actually, but it is just great to be reunited with someone important.  When I go home, my parents are always at the airport, and that reunion is special.  And it was the same when Jenny arrived - we hadn't seen each other in 6 months.  And when one of your best friends is back, there is a huge sense of relief.  Especially since I was in the middle of comps (that will be blog #2), I needed that reminder of friendship in the midst of a very stressful time. 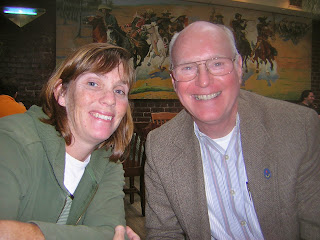 We were able to spend a lot of time together on Friday and Saturday - laughing, going out to restaurants, just enjoying each other's company.  We met up with an friend of hers on Saturday, which was also fun.  On Saturday afternoon, we even watched the snow fall - because it snowed!  In DC!  In October!  Whodathunk?!  So beautiful, and while it didn't stay, it was lovely to watch.  I'm sure my Florida friend knew that it would be colder here, but no one thought snow.  While it did not look like snow would happen for Sunday, for marathon day, it was going to be cold.
And speaking of cold, on the Tuesday before the marathon, I came down with something.  I don't know what it was, but it was a big barking/coughing, congested gross thing that I'm sure was on the heels of all of my comps prep.  It was keeping me up at night (along with comps anxiety) and wearing me out - not a good sign.
And as the snow fell on Saturday, Jenny told me to carefully consider about doing the marathon.  Rundown and with part of comps still left, it was going a bit risky to do the whole marathon.  And that is the mark of a good friend  - I was supposed to run the whole thing with her and help her.  And she knew that it would cause more harm than help.  Jenny said to think about it, and sleep on it, and no matter what, it would be great. 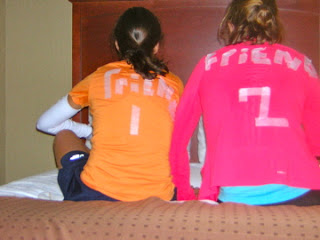 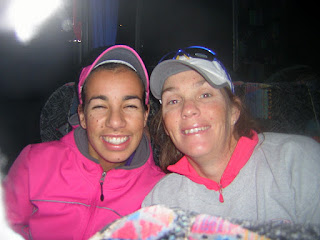 On Sunday morning, we got up and got ready for the marathon.  Matching shirts (and on the back, we taped "Friend 1" and "Friend 2") and various layers to stay warm in the 30 degree weather.  Loaded onto the bus in Crystal City, and got dropped off at the Pentagon.  We got corralled into the start, and at that point, I was very unsure about how the morning would go.  We hugged, and we were off.  Beautiful day - sunny, cold, but sunny.  And we got through the first mile at 8:45 pace, and then, I knew that it was not my day to run a marathon - I was tired, exhausted, and even though in April I ran 7:56 pace in Boston, this was not a day for me.  I watched Jenny pull ahead a bit, but kept her in my sights for a few miles. I caught up to her at the 10k mark, and told her that I was going to pull out, and meet up with her at mile 23 to pace her through the final 5k.  She was doing a great job and I knew that her training was so strong that she could hold her own.  I drifted back, and after I hit mile 10 (which is by the Lincoln Memorial), I stepped onto the curb.  I didn't think of it as dropping out, because a) I was sick b) this wasn't my race to run.  I jogged to the Metro and hopped on the train to Crystal City.
I stood at mile 23, and watched the people go by.  I had never watched a marathon before, and it was fun to cheer on the runners - because I knew what they were feeling.  And time went by, and suddenly, I saw a flash of blue - Jenny!  I jumped in, and we were off.  My legs felt fine and I knew I had the energy to pull Jenny through the final 5k.  She was tired, but she was on a great pace.  And so we ran, together, as friends do.  And as I hoped, jumping in was able to give Jenny a fresh bit of energy.  It is hard to feel like the last 5k is "just a 5k" and I did everything to help her get from mile to mile.  And finally, we got to mile marker 26.  Just that damn .2 left, and if you know MCM, that includes going up a steep hill when you're already depleted.  The finish line in sight, I could see Jenny struggling to go up and move forward.  I grabbed her hand and pulled, and a Marine behind her pushed, and then she got up the hill.  We charged toward the finish line, hand in hand, and to victory:
3:44:47.
A BQ for Jenny at MCM - her second marathon ever.  2 years ago, I BQed at MCM - my second marathon her, and that was where it all started.  Rooted to the spot, we hugged, and I cannot describe how proud I was (and still am) of her.  It was a big moment, and a very special honor to be a part of her marathon victory and BQ.
It took a while for us to summon the motivation to go out to dinner, but eventually we made it to Ted's Montana Grill (which has a lot of great GF options) and celebrate.  So many stories, so many memories were made and shared.  Giggling, laughing, just relieved to have gotten to this point, this victory.  We spent Monday breakfast with her aunt, who lives close by, and was just thrilled about the big BQ. 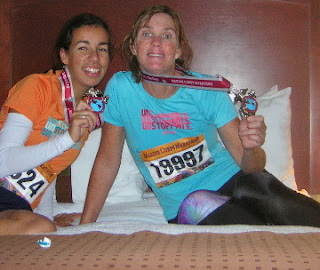 Jenny flew back to Florida in the afternoon, and while we were both sad that the visit was over, we also were just so excited about what had just happened.  It was not my marathon, but a run of friendship in its purest and finest state.
Posted by Medievalist at 10:37 AM